How Can I Deal With Criticism

Criticism is for everyone and it is part of life, in fact a process to progress, at one point or the other in our lives, we have to be criticized or face criticism, knowing how to deal with criticism is a path to a sure  success. 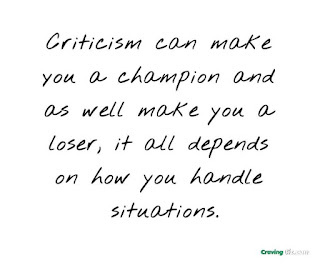 Never forget that doing the ultimate good in life, being a saint, being morally upright, faithful and just and loyal can still make you a victims of criticism.

It does not matter who you are, where you belong or where you stand, people are bound to criticize you for your good and bad deed.

No matter how much effort a person put into something that could affect personal, social and public affairs everything is subject to be criticized.

Become a Champion To Critics

To deal with criticism is to be a champion to critics, by holding on to your feelings,  be less expectant, don’t stop believing, paying less attention to peoples words, find motivation elsewhere.

Pay your dues by doing the good things you know how to do best, then wait for people to criticize your good works. It is only when you see criticism as a motivation to uplift, only then you have an edge over failure.

People are fond of critics, they will mock you when you lose and when you win they will find your fault to pull you down.

The Only Time Criticism Works

The only time criticism works is when you let it get into you not as a motivation but a regret. Only if you do not stop believing in yourself can you get past criticism. Have this in mind, the criticism that provokes also inspires.

I am a case study on critics, I have been many times humiliated, felt inferior to myself and my works long time ago, I have been blamed for doing good.

It got to a point people close to me see no good in me even when I do good, they criticize me for doing the right things which they know to be true, but because they envy my good works they criticize.

One thing you should take note of is that it is the same people who are close to you, your family and friends, in fact you most trusted pals that are pron to critici’s your good effort.

That does not mean these people can not be supportive but they are dreams killer and vulnerable to criticize you as well.

They easily kill dreams and make vision chattered. The reason for this is because they are people you could least expect to treat you in such matter.

You expect them to give you some encouragement, cheer you up and motive you. You place them high and above others, more reason why you feel rejected when you see them criticize your effort.

Does that mean you should keep up with bad deeds since you are bound to criticism for your good works? No

How you can deal with criticism

1. less expectation: Critics is nothing but a push and a pull to success, when you least expect it you find it, when you hope to expect it you get praise with positive feedback.

2. Don’t stop believing: Only you can make good things happen if you believe in yourself. Only you alone can understand who you are and what you are planning to achieve, you should never stop believing or let some negative criticism change your game.

4. Find motivation elsewhere: No one will motivate you more than yourself, if you feel you have people who can motivate you or you look up too for guidance and they fail you by criticizing your effort, do not give up but look elsewhere and move on.

6. Hold on to your feelings: Your mind is the greatest guide and weapon to help you out of criticism. When you hold on so well to your feelings, you have a better chance to excel.

Don’t be surprised, the moment you fall for peoples critics and you give up, the greater chances you give people to pick up what you left behind.