Stop Being Insecure And Improve Confidence

Being insecure can be a result of many factors, challenges, and person experiences. Being insecure as a person is a major challenge in personal life, relationship and could go as far as affecting a person’s career. 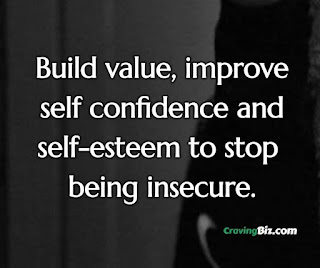 Being insecure isn’t something good as it depreciates values, respect and progress because it shows how much a person lacks confidence about his/herself.

Being insecure means the inability to trust your own guts, as a result you are not worth being who you are or bold enough to stand up for yourself, looking inferior and low self esteem.

I was once a victim of insecure, being insecure is something I would never allow ever in my life, because the experience was so regretful that I hardly forgive myself of my past mistakes.

However letting go of past mistakes is a sure way of progress if you really want to move forward in life.

The same applies to being insecure because it deters progress and eventually leave you in a more regrettable position in life. Though, everybody has their own difficulties, challenges and weaknesses.

Being insecure is a weakness you have to let go at the early stage of life before it destroys you.

Being insecure could go as far as tampering with personal, relationship and career. Imagine if these things are tampered with can a person’s life be balanced? Certainly Not! So it is better to build and improve confidence over being insured.

I remembered then, I do feel ashamed of myself when I am among friends, I feel worthless, inferior, humiliated even when I am not humiliated by anyone.

The thing is that I judge myself before others think about judging me, and rate myself poorly and woefully, this is no reason but self doubt which has to be stopped.

At some point, I wanted to know why I live this kind of horrible lifestyle, I had several thought about this so many times, which almost led to depression. I got to realise that there is something missing in me.

The reasons why I have being insecure could be that

1. I haven’t discovered myself to know who I was.

2. I had no worth nor value to offer which made me feel inferior

3. I had fear in me because I lack confidence

4. I was a bit dogmatic as I tend to believe in my own opinion without giving others a chance.

5. I realise I was not learning but dwelling on my own instinct, this made me not to improve. So I did some homework until I got the solution to stop being insecure

How I stopped being insecure

To stop being insecure is to reserve the case, by doing the opposite, after you might have known the reasons why you have been insecure.

After I have realized the reasons why I have been insecure as stated above, which was the major way forward to stop being insecure.

I improved self confidence, self worth against low self esteem, learn more, explore, seek advice, improve skills to create more values, this build a level of confidence against insecurity.

I realise that when you have something meaningful to offer other people, you will have self confidence and stop being insecure.

How To Make Yourself a Priority And Stop Being An Option