There is an adage that says “ The things an elder sees that causes shrinkage; a young person could go blind if seen” – as a result of curiosity.

Despite this, curiosity could make people search and discover things they are not meant to, the mind of this kind of people will never rest until they end up being harmed as a result of curiosity. 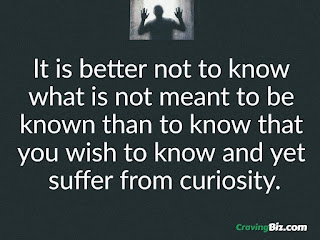 The fact that curiosity has done these beautiful things does not mean that being curious does not have great harm and effect on humans. So many people have run mad (insane) just because of being curious. I have seen people die sudden and untimely death because of curiosity.

Who Is a Curious Person?

This could make you think who is a curious person, A curious person wants to know why a thing is not known and why it can not be known, a drive to dare everything. A curious person can also be an inquisitive person who soliloquy, wonder, and think about something not known but desperate to know.

Curiosity is like a strong hunger, desire that drives man to things they do not know. The hunger for this knowledge causes man to unveil new knowledge, when this knowledge is revealed it most times becomes a problem to people who are not matured, strong enough to contain that knowledge.

Being curious is good when the mind can contain and control the inquisitiveness of a person. The moment when a person can not control that which he wants to know as a result of being too inquisitive, curiosity is then considered harmful.

While curiosity has made people discover so many wonderful things in the world, as it as made other people become a successful person,

The fact remains that curiosity can not be taken away from human life because it has done so many great things, inventing, and reshaping the world through science and technology.

King Solomon who wrote Ecclesiastes has said it all “ The more you know the more you get hurt, the more you understand the more you suffer” This is as a result of curiosity which I have quoted several times on topics related to curiosity and being inquisitive.

It is better not to know what is not meant to be known than to know that you wish to know and yet suffer from curiosity. However, having knowledge of both makes you wise.

When is curiosity considered harmful to a person

In conclusion, The disadvantages of curiosity can cause more harm than good, curiosity is considered bad when a person is being too inquisitive, failure and the inability to stop asking questions.

How To Stop Being Available And Being Used By People