What To Do When You Fail At Your First Chances:

Opportunities in life are few, and second chances are rare. A person who fails to take chances will fail to seize opportunities and might not get a second chance if the first chance is lost. 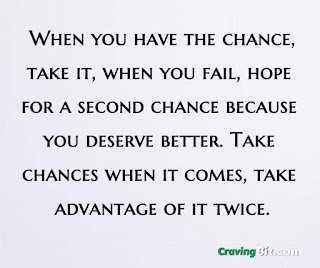 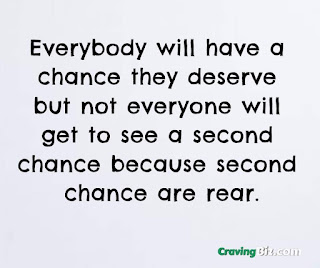 “When you have the chance, take it, when you fail, hope for a second chance because you deserve better. “Take chances when it comes, take advantage of it twice”

1. Because we lack knowledge: Everybody deserves a second chance because we are human and not God. Only God is all knowing, we humans do not know all things so our knowledge is limited to what we know. We are inferior to understanding, we are only trying to cope with life as it teaches.
Humans are only filled with ideas about everything, God is the only one who knows all. So it is important that when we fail at a chance it doesn’t mean we are a loser because a loser is not always a loser, a loser can win. When we keep trying anyone can get a second chance they deserve
2. Because we make Imperfect: Our imperfections are something we can not run away from. As humans, we all have our flaws and we are bound to make mistakes, we may have failed at taking our chances when we had the opportunity due to some reasons best known. However negligence is one of the reasons why people fail at their first chances created, overcoming negligence helps anyone who knows his or her own fault and correcting those faults deserves a second chance.
3. Because we forgive: Everyone deserves a second chance if they are to be forgiven. Knowing that to love and to forgive is the key to a better world. It is important to forgive one another and give others a second chance to prove themselves right because forgiveness gives a person a second chance to correct mistakes. When a person isn’t forgiven opportunities will be hard to come by, neither will a second chance be created.

4. Because life is impartial: Some people may see life as partial, but things aren’t the way it is. Life is impartial, yet could seem to favour one person than others. It happens this way because this is how human thought is. But life favors all and as well give everyone the second chance they deserve if they keep trying and doing the right thing.

1 thought on “Reasons Why Everyone Deserves a Second Chance”