Importance Of Being Inquisitive For Learning:

Being curious has helped so many great people achieve great things. Still the urge to know more keeps growing in their minds because they understand the importance of curiosity and how it helps learning. 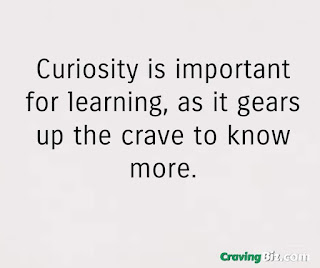 Every new idea and knowledge majorly from philosophy, science and religion didn’t fall from the sky but was brought out of curiosity. Curiosity is an endless hunger, a drive which consistently keeps the human mind thinking of how to make the impossible possible by research and discoveries.
Being inquisitive has molded the world from being a place of self imprisonment to creation of freedom. How do I mean? The world was once a place where people do not know how things work or what good lies ahead of time, but with the help of curious minded people the world has become an endless adventure that keeps man craving for more.

If you feel an endless urge to know something when learning, it means you are curious about something you crave for .

Curiosity began in the ancient times before Christ, from which civilization began. In the days of the ancient world, curiosity brought about great philosophers such as Aristotle, Plato, Alexandra the great and many others who used the help of philosophy to re-sharp the world, from being primitive to a civilized state.
After which some other scholars came into existence to falsify some theories and laws stated by others. For instance Pythagorean, a greek philosopher, who first proposed that the earth was flat around 500BC, after it was falsified by Aristotle in 430BC stated that the earth was spherical in shape.
Out of curiosity, new things were discovered and many more are still being discovered as the importance of being curious helps humanity to learn new things and also to grow. New inventions are done with the help of being inquisitive, more reason to know about how curiosity led to an important world issue.
1. Gain new knowledge: Curiosity helps gain new knowledge when learning something new. Being inquisitive will never put the mind at rest until new knowledge is gained and new things are achieved as well. The more inquisitive you are the better things you learn, the greater you become if done rightly.
2. Exposure: With the help of curiosity, being inquisitive opens way to explore new adventures of life by being exposed to ideas and knowledge while learning. Getting exposed could be a great benefit as it helps you become successful if exploited the right way.
3. Confidence: When knowledge is gained out of curiosity, it helps to prepare the mind against what is ahead. Curiosity builds confidence while learning because when a person is being too curious he/she does not care what might happen next, all that comes to the mind is to see the end result.
4. Loss of fear: When learning, curiosity will teach you the hard way to make you fail, but in the process of failure it makes you fearless. When we are afraid of trying something new, curiosity helps get over fear of failure because it keeps pushing endlessly.
5. Accomplishment: Learning is endless as life itself is a teacher, the more we live the more we learn, with the help of curiosity the better we become, a curious person will never stop learning until things are accomplished.
6. Discovery: There is nothing more we can learn for being inquisitive than to discover new things as we keep learning. A curious person has the tendency to know much better than a person who is not curious.
7. Achievement: The reason why everyone learns in life is because they want to achieve, curiosity is important for learning because it is the backbone to success.