Good or Bad Morals In Youngsters:

Proper behaviour of children in rural areas and unethical lifestyle of youngsters in urban areas are product of so many factors which includes proper upbringing, social factors and many other factors could be a result of good or bad morals in children. 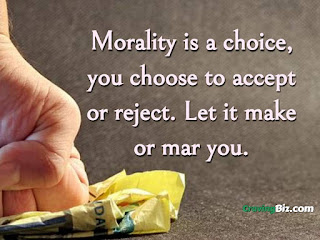 Children in urban areas are believed to have bad morals while children in rural areas are said to have good morals. This is true to some extent, but that does not mean that all the children in urban areas do not have good morals, and likewise youngsters in rural areas do not have bad morals.
All bad and good morals of a child depend on the proper upbringing of such a child, social influence and how a child chooses to adapt to the environment by either accepting good morals and rejecting unethical lifestyle or vise versa.

Youngsters are vulnerable to be easily influenced by proper behaviour and bad morals be it in rural or urban areas. However the percentage of youngsters who lack good morals are majorly from the urban areas and here is why.

What is an urban area?

An urban area is a well developed area which could be called a city. Urban areas are civilized areas, where social life is high, an urban area is a non agricultural area, an area well structured with good roads, big buildings, companies, organization, industries, modern school, religious centres and more.

What is a rural area?

A rural area is a primitive environment, such as a village, and local towns. There are fewer people in a rural area compared to an urban settlement. A rural area is more or less the opposite of what an urban area is.

Also Read: Easy Ways To Aim At Success: A Moral Of Success Story

Both good morals or bad morals are inseparable in children, either in the rural or urban settlement. As far as we are human good or bad, morals can not be separated from a man’s behaviour.
The world in itself consists of both good and bad which makes the world a better place for mankind. To this end, it is hard to separate good morals from bad morals among youngsters living in urban and rural areas.
However, the level of proper upbringing in both children in rural and urban areas are extremely different and high respectively, because most of the children living in the urban areas such as the cities are exposed to a wild way of life.

1. Civilization: The introduction of civilization such as industry and gigantic buildings in an urban area could easily influence youngsters in urban areas to varieties of immoralities.
A city consists of different people with different lifestyles, combined with people with good morals on one hand, and bad morals with corrupt people on the other hand. Because urban areas are civilized, people prefer to migrate from different parts of the state to the urban settlement. With this, there is a mixed up of moral lifestyle.
2. Population: Due to the large population caused by civilization, it is easier to promote bad morals in urban areas among youngsters. Populations of people introduce both good moral and unethical lifestyles among children.
People from different tribes come together without little or no moral regulations to check their behaviour in urban areas, whereas in rural areas, ethics and good morals among children are regulated. Moreover, rural areas have less population.
3. Way of life and survival: Because of the large population in urban areas, the way of life and mode of survival is always challenging compared to people in the rural area. Youngsters in urban areas are vulnerable to bad morals and could easily be influenced when trying to find a life for themselves.
They might end up with the wrong peer who may teach them the wrong things such as sexual acts, scamming, fraud and stealing, which comes as a result of the population of the people, which is greater than the job vacancy in the urban areas. On the other hand children in the rural settlement have enough to live on when it comes to feeding and way of life.
4. Social lifestyle: In an urban settlement, the social lifestyle is less restricted because everything is open, children are vulnerable to see hotels, prostitutes on the street, crime scenes and all immoral acts in the city. While this is well restricted in the rural areas. In most cases, it is even considered to be an abomination.
5. Upbringing: Be it a rural or an urban settlement, children’s proper behaviour and unethical lifestyle could depend on a child upbringing. Knowing that the level of parents’ education does not guarantee a good morals of a child.
A child that is well trained has the tendency to have good morals and might choose to develop bad morals, whereas a child who does not have proper upbringing may be more morally conscious than a child from a rural area. One thing is to be trained, another is to accept the training and make it a part of you.
6. Peer pressure: peer pressure could easily lead to Inferiority complex, a feeling of low self esteem and lack of confidence in oneself. This could be harmful to youngsters, building confidence could help you back to your feet, when confidence is lost.
Peer pressure is not easily influenced by friends in rural areas. However, it is easier to be influenced by bad morals by peer groups in urban areas. This is because an urban area is filled with flirty things that easily catch the attention of youngsters.
When pressure is high, a child could easily be influenced and persuaded to submit to friends bad morals. This is why you need to know the kind of friends to mingle with. This will lead you on how to know fake friends and how to stay away from them.
7. Self humiliation: When people oppress a child, it is easier to commit and fall for such oppression in urban areas, than in rural areas, because they are open to a wild life with different material things of life, especially for children who came from a poor home. The rich children with bad morals will always try to oppress and humiliate them, however getting over humiliation might help over oppression.