What does gossip mean?

You must have heard people sing or say “If no one talks about you then you are nobody”. Gossip means the act of people talking about you behind you, this kind of talk could either be good or evil talk about you, which could damage you or mold you. 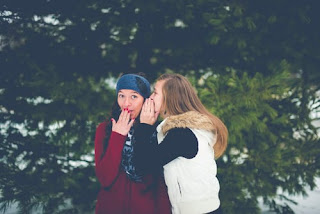 By nature, humans are naturally gossips, it seems to run in our blood, gossip is not limited to anyone, everyone gossip in one way or the other. How people paint you behind your back could be damaging but it should not in any way define you.
More reason why you shouldn’t trust anyone because even your loved ones would gossip about you, so be prepared at any time. You can be praised or mocked, but still gossip should not in any way define who you are.

Why do people gossip?

Gossip is a form of entertainment, a way to pass time by talking about someone in their absence. It is natural that as humans we talk about each other.
But when the talk is bringing out negative impressions as people say something bad or evil about you rather than the good things you have done, then it may call for attention.
Some agree that gossip is also the same as rumor. Rumor is saying a thing about a person with less proof or no proof or evidence about such occurrence. On the other hand, gossip is when people talk about what they know and what they assume they know about you without the confidence to say such a thing in your presence.

The damage gossip can cause

Gossip has sent many into psychological disorder, like mental disorder, depression, humiliation, emotional trauma, gossip will never make you progress, gossip will always make you have negative things on your mind and picture bad image about yourself, gossip indirectly slows you down on your road to success, and has also led many people to their early grave as many do not have the capacity or the ability to handle the pressure of gossip.
How will you feel if you caught someone who you so much trust, talk negative and evil things about you in your absence? You will feel bad right, you could even stop taking to the person right? If yes, I will not suggest you do that. Most people gossip about us because they want to spread rumors about us, so it can damage our personality and image in public and if you will notice, it is always our opponent or antagonist that plays such a role, so instead of letting gossip weigh you down, overlook it and move on with life.

Gossip as a weapon

Gossip could be used as a weapon to fight against you, if your haters see that he can not win against you in a physical combat or challenge.
Sometimes, you do not need to do the spiritual thing to overcome a battle or a physical fight to win a war, all you need is to know how to operate in the psychological realm, by fighting a mental battle.
When people see that they can not win you in some ways, they go gossiping about you, so you won’t know who is fighting with you and at the same time you battle with a mental disorder from people who gossip about you.

If you give in then you have given in to failure, do not let gossip break you but instead let gossip mold you for better.
People will always talk about you, yours is to accept or reject the negative impression people give about you and move on. Let gossip build you and mold you to become a better person rather than to break you so that your enemies won’t rejoice on your failure while they succeed.

You mindset is your greatest defense against any form of gossip and your environment is your weakness. How is this so? You are a product of your environment and this is more reason why the people around you could easily influence your thinking and your way of life.
If you let your environment define you then you have given in to peoples gossip about you and this could easily cause a serious damage to you. But when you know that you are a product of your environment but you have a mindset which is stronger than the environment you are in then you will not be moved by anyone’s gossip about you.
An Instance
Let’s take for instance you have a mindset that you are moving out of the country in the coming months and your mind is already made, because you have a plan, a purpose, a vision over there rather than in your country. You have taken so many years to work this out and it’s actually coming into reality, as you have already gotten your international passport ready and other required documents.
Whereas people are talking about you that no one in your family has done something good, not even a thing to be proud of, this might sound embarrassing and disgracing, could be self humiliating and could also cause depression but since you have a plan, even when the plan is not finally executed you will always try to work hard to make it work for you, because your plan is different from theirs who gossip about you.
In this sense, you are not letting your environment make you because your mindset is seeing far beyond what people know about you.
When people gossip about you, it should be a way to motivate you rather than weigh you down. You shouldn’t be discouraged since you know you are doing the right thing and when you eventually make mistakes and people gossip about you, it should serve as a force that pushes you to do more until you get it right.
Do not listen to the noise of the crowd or people who gossip about you, gossip will only weigh you down. It will never add value to your life but cause you more damage, keep moving and never relent.