Calling Out For Change

It has always been a norm to people especially people in the African countries to hold on to the belief that a child is or should be more preferred than the other. 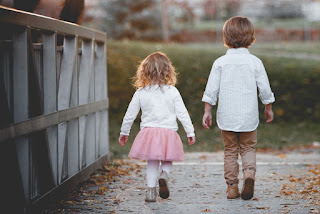 The time of preferring a child better than the other between male or female children is over. We need to change our mentality about some things.
This Article Entails:

There was once a time when rejection seem not to be a thing to bother about, a time when children experience depression and humiliation.
This has led to so many broken homes and relationships, because a partner prefers a male child while the other does not and vice versa.
These experiences are mostly common to African men as they lay claims that a male child bears the name of their family even to the next generation.
If I may ask, what exactly is our gain as a man? Who says a female child cannot make her family proud?
Related Topic:
Rejection; What To Do When You Are Being Rejected
So, do we mean if our wife cannot bear a male child we will send them out of our matrimonial home or marry another woman?
Where is the love between us before we got married? Was that the agreement we made?
We may use the colloquial word *WHO Love Help*
If you are one of such person I say congrats to you, because what you do not know will some day hurt you.
For that child you say or believed to be more preferable may turn you down in the end and the one who you look down on might be the one who will later lift you up when the can’t reach or give you a helping hand.
Have you ever thought of what could happen at the end?
Ok! Let us sight as an example using ourselves as a case study, as a man or woman we try our best to be someone important in life, we work so hard yet some people out there look down on us like we can never make it in life or be successful. 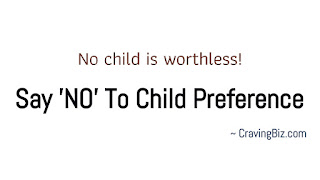 How do you feel seeing those people? Look at that innocent child; do you have any idea of what they can become or how successful they might be in life?
No one can tell.
No one knows what the future holds, so, why judge the book by its cover.
We do not know those girl children’s future or what they could become but still, we concluded that they cannot be the bread winner of the family.
Says who?
Do you even what your future holds?

Why don’t we shift our attention from the old mentality that we have always believed in and try something else entirely?
In this generation everyone is equal. Giving the boy child a preferential treatment over the girl child is now considered obsolete.

If I was asked about who is better between a male or a female child, I would say both.
It all depends on how you train your children and what you want them to be.
A child is a child there should be no difference and no discrimination in their gender on the rate of being successful or who inherits our properties or possessions.
Also Read:
How Discrimination Affects Our Personal Life
The notion, belief and mentality that a child should be more preferred than the other should be myths by now as the world is advancing as we now see reality more clearly.

Child preferences should be a thing of the past by now. If we as a father or mother still have the mentality of preferring a child than the other, it means we are not capable enough to take responsibilities of being a parent.
Also Read:
Why Parent Need To Give Children The Right To Speak
Only few people have the time to prefer a child than the other in this modern and civilized world, a world of science and technology.
Most people don’t have time. All they think about and source for is how to make money, get valid and resourceful information, take care of themselves and their family; as life seems short and death may come anytime.
No one is interested in trash talk, so if you are there with the mindset of preferring a child to the other – I am not vocal to say that You Are On Your Own.
At the end; we will leave both the name the preferred child and the others when we eventually die. By then they “the children” will leave their lives the way they want it.
While some of our children will keep praying for us as they remember us for our good deeds, I hope the ones we considered as the non-preferred will equally do the same.
In Conclusion
Every child is better. Don’t judge them with what they do now or what you see now, the future is determined by change and change is consistent.
I have seen rejected children become great people, and I know somehow you might have heard of one if not more.
The child we belittled today may turn out to be the pillar of the family. Let’s be mindful of this.
Why not take responsibilities to train them to our taste and what they want to be and await the end product.
The now does not matter; The future does. In the discourse of children’s preference.
Please follow and like us:

How Hard Is It To Get Hurt In Relationships?Relationships are interesting when things seem to fall in place, but when…