The love of brotherhood is based on trust, love and forgiveness. When we say brotherhood, its not just for brothers alone. The term brother is a masculine way of collective gender, male and female, so everybody is entitled to the hood. Brotherhood is not based or has anything to do with either religion, culture, tradition, race or class. True brotherhood doesn’t discriminate or humiliate, rather they fight and defend each other by watching each others back. 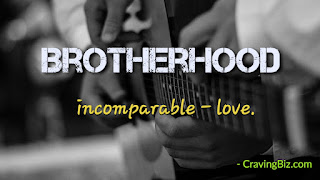 “Brotherhood is a feeling of shared interests and support among men, or more generally among all humans”. – Cambridge Dictionary

“A Friendship unlike any other, built out of respect and love, will always have each others backs”. – Urban Dictionary

A hood is a place or a group of people forming a form of sound relationship; a bond based on trust, respect for one another, irrespective of individual strengths and weaknesses.
Literally, the meaning of brotherhood is “brothers in the hood”.

Why is it practiced?

Brothers are people in the hood who are bound to protect each other and watch one anothers back. This people or individuals mostly are not related by blood but related by love and trust.
The practice of brotherhood is universal and well respected by those who really understand and value the bond, and understand that there is no big difference between love and blood relations. This practice is traditionally and practically done in most of the countries of the world. It is done out of love and willingness.

What Brings About The Practice

The amazing thing about brotherhood is that, the instinct of becoming brothers by bond is not something they practiced or inherited, not culture or tradition; it is an inborn thing, an attitude bore out of love, sympathy and trust. It is not a cultic group or a secret society or gathering; it is a feeling that cannot be compared.
As men and women falling in deep love with each other, so is brotherhood love; it can’t be compared. The love most times is infinite, undefinable and unconditional. It’s an act of watching each others back, and solving each others problem; they aren’t terrorists, but peace keepers. They are always after the progress of one another; they believe if it is better for one it is best for all.
This group awesomely is formed by mainly the youth; it is formed mostly when they seek help, refuge and comfort. As youth, the crave for success stand as their ultimate business and goal. The brotherhood are always and mostly after each others success.

As human, we are imperfect and limited to knowledge; we are bound to making mistakes and also correct them when it is realized. Also it is to be noted that there is nothing that does not have it cons and pros. Since we are imperfect and limited to knowledge, it is natural to break from natural laws and to let our dark side play its part on us since we are weak. Ego, pride, hunger for power, wealth and fame are some of the dark side of every human, which could sometimes lead to discrimination, humiliation and hatred, resulting to war and some other disastrous act. Since brotherhood is majorly practiced by the youth, then it is vulnerable and open to chaos which most times leads to violence, retaliation and thirst for blood as a result of trying to defend or protect themselves or their brothers.

It is stated above that brotherhood or the practice of brotherhood isn’t a thing of violence, it is not subjected to the race or quest for power, fame, and wealth; neither is Brotherhood base on religion, culture, tradition, race or class. True brotherhood doesn’t discriminate or humiliate, rather they fight and defend each other by watching each others back. It is based on undefined Love and forgiveness for one another. Irrespective of who or what you are.
Lets be guided. Lets stay save.
Please follow and like us: