This topic is to be pictured and examined in relations to how humiliation affects our personal life. The strong have fallen, and the weak have crumbled based on the effect of self-humiliation.

To some point, most people really don’t understand what humiliation is and the power it holds on one’s life.

Humiliation is a virus; don’t let it get into you. The moment it does, it turns your motivation, courage, zeal, passion, goals, dreams, and reality to shattered pieces. 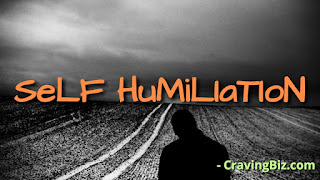 Here we will define humiliation in a literal, simple and best way we can for better understanding of what we are really driving at.

Humiliation is an act of depriving someone of his/her self-worth or effectiveness. It can also be an act which results from unpleasant actions such as, embarrassment, shame, indignity, disgrace, dishonour, degradation, discredit.

Humiliation is associated with discrimination; Inferiority complex, also, it could lead to mood swing with causes a change in the mental and physical state of an individual, resulting to failure or breakdown in career pursuit for success.

The act at which an individual looks down on another with an attitude of pride could also be called humiliation.

Humiliation is the abasement of pride, which creates mortification or leads to a state of being humbled or reduced to lowliness or submission. It is an emotion felt by a person whose social state, either by force or willingly, has just decreased.

It can be brought about through intimidation, physical or mental mistreatment or trickery, or by embarrassment when a person is revealed to have committed a socially or legally unacceptable act.

Whereas humility can be sought alone as a means to de-emphasize the ego. Humiliation must involve another person(s), though not necessarily directly or willingly. –Wikipedia

Self-Humiliation is a way, a process and act by which you personally take it upon yourself to downgrade yourself probably out of other people’s success, success story or achievements.

That feeling that makes you think you are this or that very person, that thought that comes to your mind making you keep blaming and questioning yourself or creator for not making you the other fellow who is successful.

That thought that keeps your mind pounding about why God chose a wrong path for you, while HE gave the other a better one.
On our next post, we shall be discussing ( The Effect Of Self-Humiliation on Our Personal Life And How to Overcome It.)