The Negative effects of procrastination

Procrastination is one attitude defect that affect every human being that exists on planet earth.Almost everyone of us is guilty of procrastination.
What Is Procrastination
“procrastination is the act of delaying task that must done,often because it is difficult or boring”. ~ Cambridge dictionary
procrastination is majorly caused by fear of failure, weak will power and laziness. A lot of people delay things they ought to do, because they fear, they may end up failing in their quest to get such things done. In order not to fail, they then begin to push those things forward waiting for when the conditions around them will be favourable.

Top Quote For The Day : 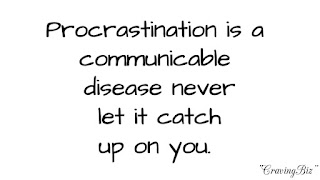 “Procrastination is a communicable disease, never let it catch up on you” ~ CravingBiz

The condition is however never favourable, hence they continue to procrastinate until it becomes too late. Some other people procrastinate, as a result of weak will power. Even though they have a desire to do something meaningful with their lives, they lack that will power to get up on their feet and get things done, especially when things become difficult. As a result of this, they tend to procrastinate almost everything.
For another set of people, they procrastinate because they are just too lazy to get anything done.They are not willing to get out of their comfort zone, as such they tend to push forward anything that appears to take them outside of their comfort zone.
Procrastination however, should be avoided. This is because of the negative effects it turns out to have on the life of individuals.
Effects Of Procrastination
1. Unnecessary Presssure: Most times people end up getting into unnecessary pressure as a result of their inability to get things done as at when due.This often lead to a situation where individuals don’t really get to maximize their potentials.
2. Unfufilled Dreams: When an individual does not maximize his/her potentials, there is the likelihood of them not fulfilling their dreams.
3. Lack of Self Confidence: Inability to fulfill one’s dreams ultimately leads to loss of confidence in one’s self and ability.
4. Fear: Fear is a disease that cause disorder of structure or function in human race . It is bound affect the effectiveness of man power not letting us achieve our goal because of being scared to lose.
5. Frustration:Procrastination brings about frustration.The reasons for this is not farfetched,when an individual fail to achieve his/her desired dreams,frustration sets in
6. Failure: When a person fails to achieve his/her dreams,that can be regarded as failure.

1 thought on “Procrastination : A Deadly Disease”