A Threat to Human Health

The world has continuosly experienced climate change in the last couple of years. Climate change is majorly caused by global warming. The surface temperature of the earth is on the rise. The reason for this is not farfetched. It is a direct result of global warming. Global warming which is caused by the release of greenhouse gases such as carbon dioxide, methane and nitrous oxideinto the atmosphere, poses one of the greatest challenges that the world is contending with at the moment. 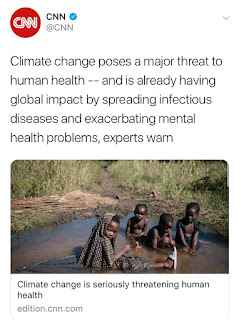 Climate Change poses a lot of threats to the atmosphere in particular and to the well-being of man in general . It causes water to level rise,thereby leading to drought and famine. Flooding may also arise from this. Moreover, it also causes the death of animals.

When the heat in the atmosphere is too much,the water in the ocean becomes acidic,thereby causing the death of some species of animals in it. Climate change also lead to economic loss. As a result of the damage to plants and animals caused by climate change, a lot of loss is recorded by the places affected. This ultimately reflects in the economy of such places.

A lot of people suffer high blood pressure as a result of the heat generated within the atmosphere through climate change. Moreover, because of the extreme heat in some parts of the world,a lot of people tend to want to move from such places to places with lower temperature.

These results in a case where diseases are easily transmitted from one location to another. It can also lead to pollution and the contamination of water, which on the longrun affects human health. Climate can also bring about the break down of shelter, thereby rendering a lot of people homeless.

In conclusion the threat that climate change pose to the well-being of planet earth cannot be over emphasised, if not well controlled, climate change may still go on to have even more damning effects on the earth in general and humanity in particular in the next couple of years. It is therefore important that necessary precautionary measures that will help to reduce the rate at which climate change is going is taken.